Detox to 2030: CID targets for a sustainable fashion supply chain 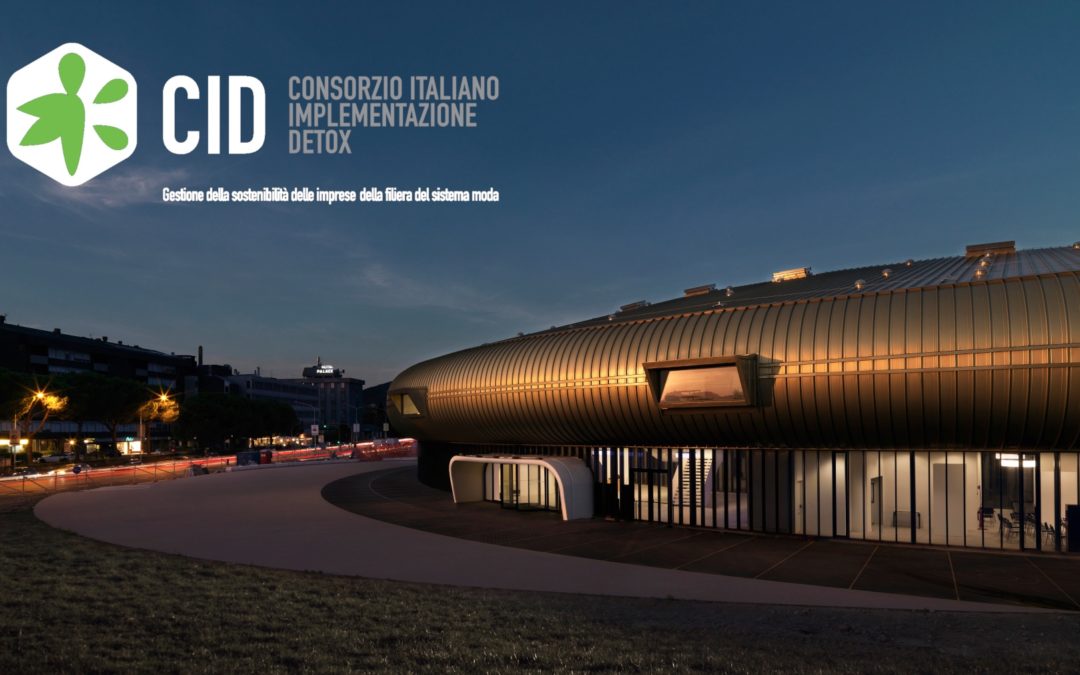 Logistics, research, traceability, ecodesign, circular economy, and chemical innovation. These are the keywords that outline the sustainability objectives for the textile industry, which emerge from the assembly of CID entitled “Detox to 2030”.
The event, introduced by Andrea Cavicchi the president of the Consortium, has seen a first part dedicated to the activities of management of the Consortium, and a second part to the round table in which national and international partners participated to present the new projects in progress.

“Despite the difficulties faced in 2020, we have kept all our commitments and, as a Consorzio Detox, we have continued to support the initiatives already shared with members, alongside new innovative projects.” explains at the opening of the meeting the president Andrea Cavicchi.

Discover the “Detox to 2030” assembly video.

At the end of the first part of the event, dedicated to the meeting, the second part of the meeting saw the presentation of three new CID projects, developed in collaboration with several partners:

City Gate is the pilot project born from the collaboration between CID, Interporto of Central Tuscany, Logislab of the University of Florence and Tesi Square. The objective is the traceability of the movements of the textile material and the use of green vehicles to carry out collective transport within the district of Prato. In the first phase of the project will be analyzed and monitored the paths made by the semi-finished product of two wool mills (Nova Fides, Marini Industrie) and their production system with “the objective – says Cavicchi – to make the supply chain more efficient, trace the product and therefore reduce the environmental impact, starting from the reduction of pollution given also by the handling of seeds processed in textiles”.

“The value of this plan – the president of Interporto Francesco Querci adds – is also to have put in existence an integrated system between the companies of the district and the metropolitan area, combined by a project that could be an example for other districts and sectors of the national territory”.

CID and ZDHC together to reduce chemicals in fashion

Create a standard circular economy model aimed at reducing waste in the fashion industry and wastewater management. This is the aim of the memorandum of understanding between CID and the ZDHC Foundation to introduce chemical innovation into a new concept of toxic-free fashion.

“We started exchanging useful data to develop good practices that could be useful to the supply chain, with the aim of guiding fashion towards sustainable solutions,” said Alessandra Tortora, Southern Europe Director of ZDHC Foundation.

The new edition of The Time is Now! with IED and Greenpeace

The time is now! New citizen 1.5 is the project of CID in collaboration with IED and Greenpeace Italy aimed at new generations of designers. “The 2020 edition of the project asked the students to redesign the identity of the Green Market of Greenpeace Italy, imagining products that in their use can guide sustainable behavior and the reduction of consumption,” explains Chiara Campione, Head of the Corporate and Consumers Unit.

“This second edition of the contest 1.5, whose number indicates the maximum increase in global average temperature, according to the agreements of Paris to limit climate change, has pushed the kids to confront this challenge and imagine the fashion of the future thanks to the raw material of virtuous companies” added Giovanni Ottonello, art director IED.

Sustainability values in the fashion sector

“The challenge of a cutting-edge company like Stella Mccartney – says Gabriele Maggio, President & CEO Stella Mccartney – began in 2001 with the use of tools to measure the impact of its supply chain and now focuses on circular economy goals. We aim for a process that allows us to reduce to zero the impact of products already consumed and sold, at the same time there is the need to create an integrated system for which the end customer better perceives the value of a sustainable product”.

“The pandemic – adds Chiara Campione of Greenpeace Italy – has put even more the environmental emergency at the center of public debate. After the first lockdown, thinking of a restart, we were asked about the need to place the planet and people before profit. Our proposals are based on solutions that stop rewarding polluters and focus on the promotion of resilient and alternative business models following the example of the textile industry promoted by CID.

Implementation in the elimination of chemicals or the use of safer ones is the fundamental point touched by Frank Michel, executive director of ZDHC. “The work done in Italy with Detox, together with what we are doing as a ZDHC Foundation worldwide, leads to increase the value of the textile product that is more controlled, safe and sustainable”.